Chasing the dream - 4 weeks till Boston - "Run with caution" 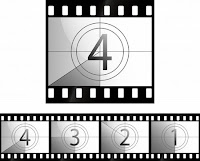 The countdown continues.  Today marks four weeks until the 115th Boston Marathon - four weeks until I will be running one of the most prestigious marathons in the world.  Four weeks is a psychologically significant point in the training schedule for me.  It means my preparation time is now mere weeks instead of months, and only two of those four weeks can be used for building on strength and speed before the taper begins.  Runners are tempted to push hard to include challenging workouts into the final weeks before the taper, which prompts a reminder to add another very important, and often overlooked, element to the training schedule: caution.

It's easy to get swept up in the excitement (and anxiety) of race preparations.  We stress over whether we're doing enough to be ready for the big day, and we forget to think about whether we're doing too much.  As the weeks dwindle away, the need to BE CAREFUL becomes more and more important.  Why?  Because as the days remaining until race day diminish, so too does the window of time available to heal an injury.  Many injuries that involve torn muscles can take 6 to 8 weeks of rest to recover; and injuries that involve a stress fractured bone can take 8 to 12 weeks of rest - sometimes more.

Experienced runners will tell you that ramping up distance too aggressively is a dangerous thing to do, and can result in an injury. I was well aware of the risk associated with adding distance too quickly, however, I didn't make the  connection between "distance" and "elevation" (hills), and how increasing elevation too aggressively can have an equally damaging outcome as increasing distance too aggressively.  I learned that today.
I've been experiencing some pain in my groin over the last few weeks.  I thought nothing of it, assuming that this was just another "training pain" stemming from muscle fatigue.  On Friday, the groin pain worsened during my evening run, and I sensed that the pain could be more than simple muscle fatigue.

I went to my physiotherapist this morning to have the groin pain assessed.  As my physiotherapist tested my adductors and abductors for strength and pain, I explained my recent training regiment with her.  Her assessment is what she called a "pre-fracture" in my pelvis.  A "pre-fracture" is her way of describing what happens to the bone before it actually fractures.  It seems the increase in downhill running, which is very high impact running, has stressed my pelvis and left it in a more delicate state.
Luckily I seem to have caught the problem before it progressed into a full blown injury, but it has certainly planted a fear in my heart.  My lesson this week: moderation is important for ALL aspects of your training.  From distance to hills to weights: it's imperative to give the body time to ramp-up.  Training too little should not worry runners as much as training too much.  You can always make it to the start line under-prepared, but you likely won't even see the start line if you over-prepare and end up with an injury.

Chasing the dream - 5 weeks till Boston

When I opened my blog today to see that my last Boston Marathon post was three weeks ago, my first reaction was, "did I lose a post somewhere in cyberspace?".  Then I yawned....and that explained what happened to my last post: it got sucked into the same vortex that the rest of my life gets sucked into when I'm clocking big miles. 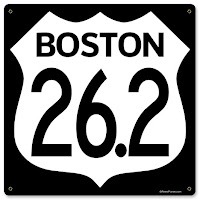 Wow, I can't believe it's now five weeks until the Boston Marathon.  The only thing that makes it completely believable is the feeling that seems to hang over my head almost every day - like a dark cloud with a really bright silver lining.  The side effect of a 6-day per week training schedule is fatigue, and the side effects of fatigue are anxiety and doubt.  If I hadn't been through the entire marathon training cycle before, then I would likely be wanting off the marathon train right about now.

If you are currently (or planning to) train for a marathon, don't be surprised if anxiety and doubt creep up on your shortly after fatigue settles in.  This is where a sense of discipline trumps one's love for running as the foundation of marathon success.  Two of my five runs last week were only completed (and started) because I talked myself out of the desire to chill in my PJ's instead of lacing up my running shoes.

As I mentioned before: if I wasn't familiar with this process, I might be feeling hopeless right now; but I know that the fatigue is normal - not only because the same thing happened to me last year when I was running high mileage, but also because I've heard and read similar stories from other distance runners.  As I slogged through the 30 km hilly distance on Sunday, I searched my mind and soul for anything that could inspire me to keep going in spite of the deep spiritual and emotional fatigue I was feeling.  Fending off negative thoughts is an important key to finishing and *enjoying* long runs.  If you can master your mind, you can master distances that you never believed you were capable of.

As I sifted through the usual motivational thoughts, I finally stumbled upon the one thought that has resurrected me from more than one tough spot over the last year.  The magic motivator was not to think about a sports hero or a reward that I would enjoy when I finally got through the challenging moment.  It was faith.  You don't have to be religious to benefit from the feeling of faith - I certainly am not.  The faith that fueled me was a faith in the plan - faith that if I stuck to my training and put in the work, then my dedication and faith would be rewarded with a great marathon day. 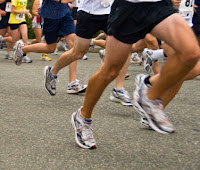 Have faith in your plan

Training my first marathon taught me more about running than the previous three years of training for shorter distances all put together.  Shorter distances were not "scary" enough to frighten me into a solid training regime.  Most of the time I simply ran according to how I felt.  If I felt like running a long distance, then I did.  If I felt like running fast, then I did.  I wasn't running poorly, but then I wasn't excelling either.

When I trained for my first marathon, I followed a very strategic plan.  I learned words like "tempo", "fartlek" and "LSD" (long slow distance).  I learned about "negative splits" and that going slow was as important as going fast.  I pushed hard - so hard that on the day of my final long run before beginning my taper, I succumbed to the fatigue and welled up in tears part way through the rainy 33km distance.  The combination of fatigue and worry over the marathon just two short weeks away resulted in a mid-run breakdown.

I managed to stop crying long enough to get myself home, but the waterworks resumed shortly after I walked through my door.  I felt so burnt out, and I couldn't figure out how I was going to run a marathon feeling the way I did.  The next two weeks were tough - but for different reasons.  I worried about tapering.  I worried about losing the strength and speed I had worked so hard to develop during the months prior to the taper.  I fought the desire to keep running long distances and focused on resting my body - hoping that the marathon success formula would work for me.

When marathon day came around, I made it to the start line with nothing but my four months of training under my belt, and the faith that it was all going to come together in a successful race.  And come together it did.  As the miles and minutes passed, I was surprised at how strong I felt.  When I crossed the half marathon mark, I felt fantastic.  Then I crossed the 30 km mark - still feeling fantastic.  I decided to throw caution to the wind and I ran faster than I had planned.  Mile after mile, I amazed myself, and I crossed the finish line feeling tired but not broken.  My first marathon was everything I dreamed it would be. 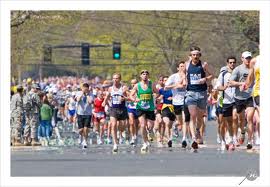 Spring is here, and many runners are preparing for the plethora of races that fill the fair weather months.  If you're working towards a distance you've never run before - perhaps your pursuing your first marathon - my message to you is: make a plan and have faith in it.  Do your research on tried and tested training plans and follow them knowing that you will get OUT of running exactly what you put IN to running.  Do the work, respect your taper, and believe that sticking to your plan through all of the highs and lows, will pay off in a great race.
Posted by Jessica at 7:17 PM No comments: