A second shot at "once in a lifetime"

What's the best way to start a Monday?

With an e-mail from the Boston Athletic Association confirming that my application for the 2012 Boston Marathon has been accepted!  As soon as I opened my e-mail today and saw the word "registration" in my inbox, my heart leaped.  I was hoping to receive the e-mail this week...I didn't think I would receive it this soon.  My face went hot as I rushed to click the e-mail to open it.  It was the news I wanted to hear:

"Jessica Wilson,
This is to notify you that your entry into the 116th Boston Marathon on Monday, April 16, 2012 has been accepted, provided that the information you submitted is accurate." 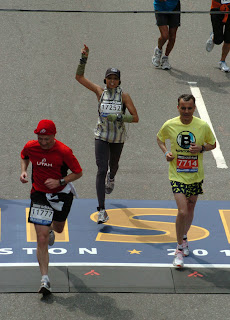 Life is fueled by our aspirations to make our dreams come true.  We are motivated by a voice in our heart that guides us like a compass towards moments in life filled with satisfaction, success and a supreme contentment with our human condition.  Some dreams are very personal, and some resonate with other like minded people.  Some are tiny...and some are mighty.  Sometimes we are inspired to share our dreams, and sometimes we hold them in our hearts like secrets - never meant to be known to another living soul.  Some we don't achieve.  Yes, some will slip through our fingers, leaving us to tell the tale of "the one that got away".  You can't win all the time.  But some we actually realize, and they shine like stars above the mountaintops of our imaginations - reminding us that dreams can come true if we only try.
And if we're really lucky, we might just get the chance to live a dream twice.

On April 18, 2011, I ran the Boston Marathon for the first time, and it changed my life.  Never before had I anticipated so much from an event (except for maybe my wedding day), nor had I ever demanded so much of myself at any other time in my life.  For four months, I dedicated my heart, soul and body to making the most of my (possibly one and only) opportunity to run in the shadow of nearly every great runner in the modern world - to run the Boston Marathon.  Not only did I demand a lot from myself, but I delivered on my promises and dedication to myself by running my way to another Boston qualifying time of 3:38:49.

Two for two.  Two marathons run....two Boston qualifying times.  Any runner would be satisfied, but satisfaction can culminate in disappointment come registration day.  Simply running a Boston qualifier (aka: "BQ") doesn't mean you'll cross the hallowed roads from Hopkinton to Boylston Street on Patriot's Day.  No, it doesn't.  The marathon has been called "every man's Everest", and let me tell you: people want to climb!  Boston is now as difficult to get in to as it is to qualify for.

On October 18, 2010, the Boston Marathon sold out in less than eight hours.  Runners who were unable to register in spite of their superior qualifying times were up in arms - forcing the Boston Athletic Association to change the registration process to a more "performance based" tiered system.  The system is simple: faster runners get the first crack at registration, leaving "barely there" hopefuls to hope there would be spaces left after the fleet feet had their opportunity to claim their place.  Luckily, I ran my BQ in a time fast enough to allow me an opportunity to "pre-register" - but not until two other groups of faster runners had their first crack at the registration process.  My time makes me "the slowest of the fastest", but today it might just have been enough to get in.  My registration form was submitted and a confirmation number was assigned: 2011829.  It has a nice ring to it doesn't it?

Ah - not so fast.  We're not at a happy ending yet.  If only this confirmation number meant I was registered.  As much as it is a great start and an excellent indication that my application will be accepted, the BAA has the final word.  Each application is reviewed manually - qualifying times are confirmed and details are vetted for accuracy.  Only when that magical e-mail arrives in your inbox indicating that your application has been confirmed can you breathe a sigh of relief knowing you are "in".

So, my road to the 2012 Boston Marathon may have begun today, or it may not.  As soon as the stress to get registration submitted ends, the stress of waiting for the confirmation begins.  I'm not sure how easy it will be to perform daily routine tasks with fingers and toes crossed, but I'm sure I'll make it work for the next few weeks....while I wait for that magical e-mail...while I wait for history to repeat in the most appealing way...while I wait to be "in".
Posted by Jessica at 9:10 PM No comments: